Just an update on the progress of the Red Sandstone Facade Restoration we are presently undertaking. As you can see from the photo (Before and frame) we have our dust retention and weather proofing ‘Tent’, frame in place which also allows us to hang the all important hessian tarpaulins to protect the mortar during the initial set and cure period.

You can see that the Facade has undergone the usual cement repairs and cement pointing. I would suggest that the vortex effect of the wind around the ‘downpipe area’, has increased the rate of erosion in that area and also saturation of the stone caused by leaks from the previous defective gutters. Talking of gutters, you can buy original specification cast iron gutters, aluminum or plastic but we also have a simple and non invasive procedure that ensures your original cast iron gutters will no longer leak.

The combination of excessive moisture in the stone and cement repairs had caused the surface of the stone and the stone under the repairs to deteriorate severely. However, we had more than sufficient depth of stone and a few test patches showed that if we removed between 15mm and 20mm, we would most likely come to ‘sound’, stable stone. So in consultation with the clients, the decision was made to do minimal repair and preserve as much original stone as possible.

Photo B2 shows the ‘downpipe area’, once the previous repairs, cement pointing mortar and friable surface stone has been removed. You can also see that we have ‘dressed back’, to a sound substrate and sufficient depth two of the masonry units, in preparation for our own lime mortar pointing and sandstone repairs. B2 (Stone dressed and surface repairs prepared) shows the Ashlar to the right of the door. The window sill shows the natural grain of the stone looking beautiful and exposed once more.

The Mullions had not had many repairs done to them however, the surface of the stone was delaminating and eroded. In addition the stone had absorbed a lot of atmospheric carbon over the years. Picture B2 (Carbon Traces) shows the traces of Carbon just below the untreated surface. Pictre B2 (Carbon Exposed) shows the carbon that was lurking a few mm under the surface of the stone. In this case as mentioned before the Mullions were suffering from delaminating and friable stone so in order to restore the masonry units we continued to the depth shown in picture B2 (Depth stone is dressed back to remove carbon). Picture B2 (Work in progress) is exactly as advertised!

Once we had dressed back the stone it then became time to work on the ‘finish’, of the surface. The video shows the sandstone being ‘ buffed/polished’, whilst at the same time using a spirit level to ensure that the surfaces of the Ashlar stone are plumb and flat. The final stage of smoothing the finish stone is being done by ‘hand rubbing’, ensuring all the swirl marks are removed from the buff stage and that the arises are straight and true.

Then onto sandstone repair. The stone edge under the replacement gutters had been badly damaged by the deterioration of previous repair materials. Again the stone was dressed back to a sound substrate. The preparation was the same depth for the entire length of the facade to ensure an even aesthetic appearance. Photo B2 (Repair Preparation) shows two of the team ‘backfilling’, the repair area with Intercromex, prior to the application of strips of render mesh (to prevent a crack developing where the stone and repair product meet) and the colored top coating of ST One (Lithomex). Photo B2 render mesh shows the strips of render mesh being ‘pressed back’, into the Intercromex backfill, mutiple strips were layered to increase strngth and longevity of the repair.

That is it with the update on the Red Sandstone Facade Restoration. Other repairs and the pointing have been done, it is presently tucked up underneath its hessian tarpaulins and the ‘Finished’, photo will be on its way soon.

Meanwhile….a Traditional Build Damp Proofing taste : Look what we found in the fireplace! It certainly was not Santa and I don’t think even Santa could have got down this ‘moisture wicking and bridging’, debris packed chimney! Hard to believe that the moisture had ‘bridged’, from the outer Sandstone Gable, through the debris, a single brick wall and coat of cement…but it had and the wallpaper simply peeled off!

More information and photos to follow as the job progresses!

Thanks for reading and see you soon!
The team at Sandstone Solutions. 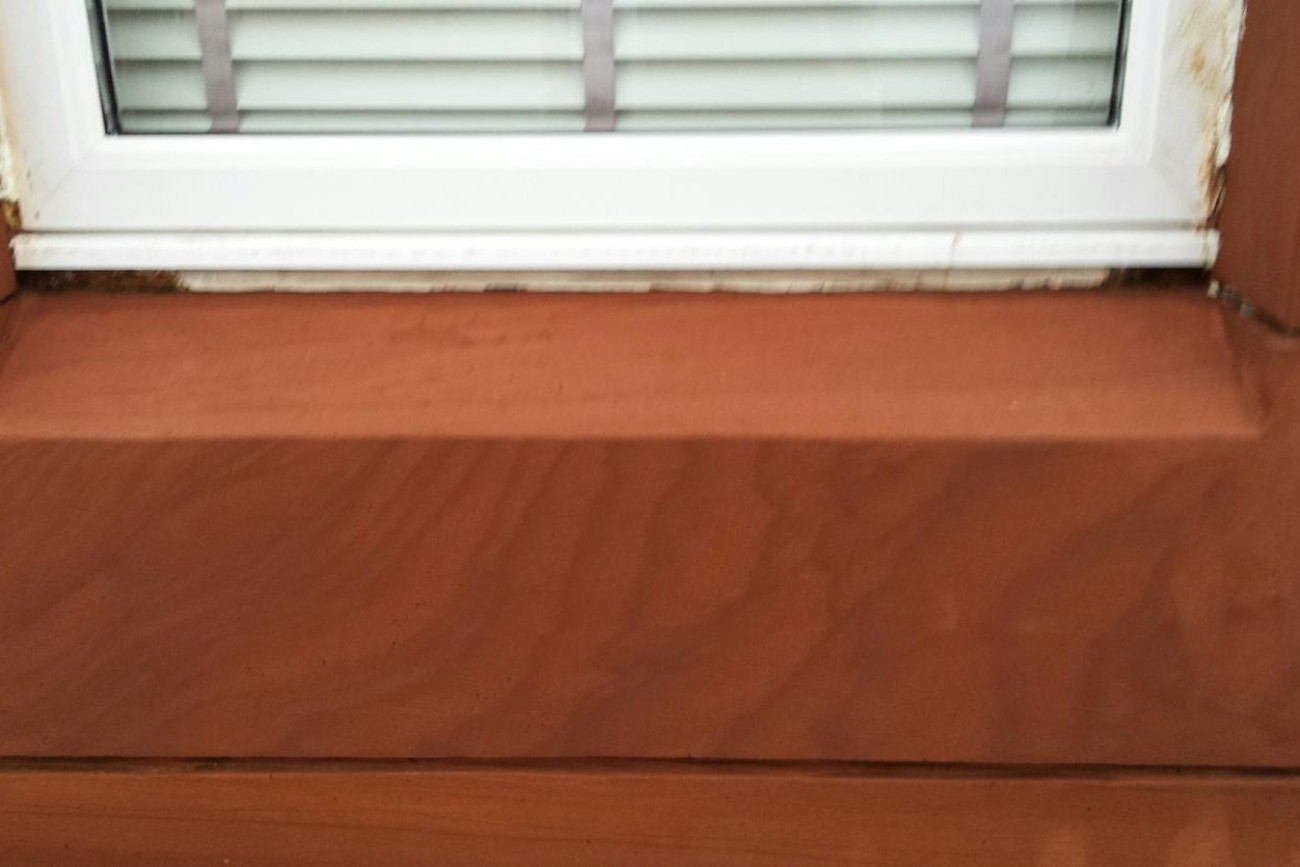